This is an absolutely precious image…the eye of the beholder…what sensitivity! Please direct your likes and comments to: http://kelzbelzphotography.wordpress.com/2014/09/28/petals-of-hope/comment-page-1/#comment-6976

spilling them on the Autumn grass…

as though it was her duty to glean the branches of its beauty.

Birch tree hung on to its children

not wanting to let them go…

But, alas, the forward passage of the promise

could not hold sway and off they traveled

shedding their birthright, transforming themselves

into their new way of being…

With each birth, comes the letting-go…

the song of yesterday builds the beauty of tomorrow…

A very insightful article on Autism and touches upon Asperger’s Syndrome. Please direct your likes and comments to: http://yadadarcyyada.com/2014/08/25/rock-paper-scissors-lizard-spock/

I think it’s tragic that people have so many prejudices, especially about things they don’t understand. They don’t know what they’re missing.

Have you even known someone with: ALS,MS, Parkinson’s Disease, CP, Alzheimer’s, Tetanus, Pinched nerve, meningitis, Huntington’s Disease, Migraines, Epilepsy, Polio, stroke, or any of the other neurological disorder?

Would you tell someone who’d suffered a stroke to just talk properly? Unlikely.

Would you tell someone with ALS to stop being so lazy? No way.

Tell someone with Alzheimer’s they could remember if they just tried harder? Doubtful.

Someone with Parkinson’s to stop shaking, that they were just trying to get attention? Improbable.

Yet people with Autism are constantly told to grow up, smarten up, man up, stop being so lazy. People scoff, blame, bully, abuse, mock, make jokes, call names, etc.
Autism is a neurological condition just like any other. They have as much control over how…

The Native Americans in this country deserve respect. To suggest that “Redskin” is not offensive is a blatant lie. I live in Wisconsin, home to many Native Americans. Racism is alive and well–unfortunately. It is 2014 and still the Native American is ridiculed in this state. I can only imagine what these people must feel to have this type of reference used over and over in our country. Please direct your likes and comments to: http://kstreet607.com/2014/09/28/daily-show-confronts-redskins-fans-with-native-american-activists-it-gets-awkward-fast/#comment-159768

That’s how Jon Stewart introduced Jason Jones’ Thursday segment on the Washington Redskins, a package that had attracted some controversy before it even aired.

In a Sept. 19 Washington Post article, the Redskins fans who appear in the segment with Jones reported feeling ambushed, endangered and defamed. Jones and his “Daily Show” producers interviewed the group of die hard fans, then brought them face-to-face with a group of Native Americans activists who fiercely oppose the team’s name and logo.

The segment also featured an interview with team owner Daniel Snyder, who reiterated his stance that the name Redskins isn’t offensive. “The name…

AN amazing poem…brilliant! Please direct your likes and comments to: http://theboipoet.wordpress.com/2014/09/28/travelling-west/ 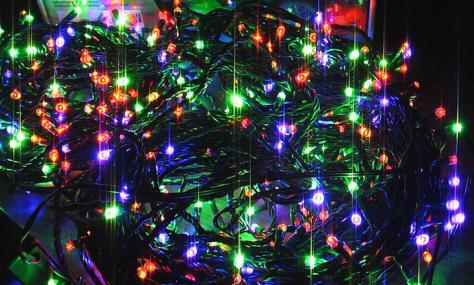 Fairy lights sparkle on tinsel
and snow drifts from a can
wishes come true inside parcels
placed beneath the tree
with secret smiles.

Laughter echoes with racing cars
whirring round a circle track
men being boys as turkey
roast and trimmings
arrive at the table.

Smiles of gratitude
and motherly nature for
dolls with long blonde curls
and eyes that cry femininity.

Plastic role models of what should be
buxom and sensual with waists too small
and fake painted smiles
that hid the tears for the missing
crossbar on a pink bike.

Lara and her little friends in Togo…2014 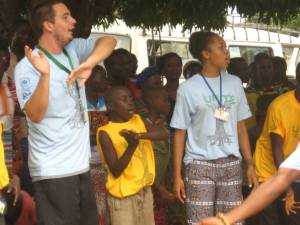 This past week I had an awesome opportunity to participate in Camp Unite. Each year the camp invites 100 girls & boys from across Togo to participate in a week filled with sessions ranging from HIV Prevention, Leadership, & Self Confidence …- plus a bunch of fun activities for them to just be kids. 2 girl students, 2 boy apprentices, & my counterpart joined me for the camp. It was so exciting to see them return from the camp so confident and energized to share what they learned with our community. Can’t wait to see what this next year brings

there is no way to describe the tears

there is no way to describe the love

it is intense and not mild

life is a constant “letting go”

tears come from the deep

and there they grow

as love transcends all that we seek

Nature has that way

to make us find ourselves in the quiet…

and being in its presence…

breezes through our thoughts…

blanketing us with serenity…

the night was leaving…

to peek out their warmth and rays

the wind spoke gently to my heart

urging me on to hope

urging me on to trust

urging me on to believe

as the leaves reveal their true color

to renew themselves in splendor

in their unique radiance

as they color our world

A very informative posting about HIGHLY SENSITIVE PEOPLE. Please direct your likes and comments to: http://petitemagique.wordpress.com/2014/09/19/battling-an-extreme-sensitive-little-monster/comment-page-1/#comment-16909

There is a weird monster out there. Being sensitive is great, but this particular little monster can drive you crazy if you don’t know how to handle it. It’s called ‘Highly Sensitive’.

Explanation from the experts:

‘A highly sensitive person (HSP) is a person having the innate trait of high sensory processing sensitivity (or innate sensitiveness as Carl Jung originally coined it. According to researchers, highly sensitive people, who compose of about a fifth of the population (equal numbers in men and women), may process sensory data much more deeply and thoroughly due to a biological difference in their nervous systems.’

I have to battle this little monster and I can tell you that it’s not easy to feel everything so very deeply.

The strange thing about this monster is that it can be both a blessing as a curse.

Being a HSP does NOT mean that you are weird… 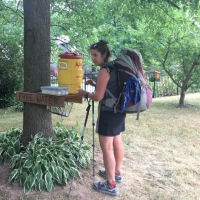